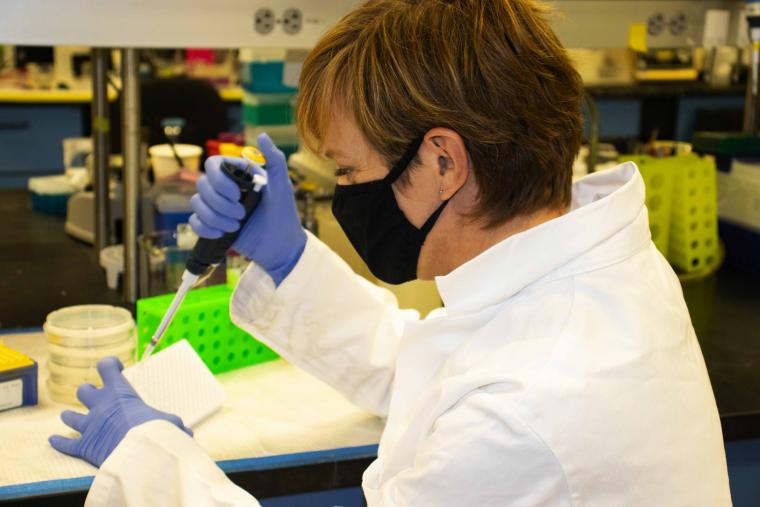 Our research focuses on the signal transduction pathways and molecular mechanisms controlling directed cell migration, or chemotaxis, in eukaryotic cells.

Chemotaxis is central to many biological processes, including the embryonic development, wound healing, the migration of white blood cells (leukocytes) to sites of inflammation or bacterial infection, as well as the metastasis of cancer cells. Cells can sense chemical gradients that are as shallow as a 2% difference in concentration across the cell, and migrate towards the source of the signal, the chemoattractant. This is achieved through an intricate network of intracellular signaling pathways that are triggered by the chemoattractant signal. These pathways ultimately translate the detected chemoattractant gradient into changes in the cytoskeleton that lead to cell polarization and forward movement. In addition, many cells such as leukocytes and Dictyostelium, transmit the chemoattractant signal to other cells by themselves secreting chemoattractants, which increases the number of cells reaching the chemoattractant source.

To investigate key mechanisms of signal transduction underlying chemotaxis, we are using the social amoeba Dictyostelium discoideum as well as human cancer cell models. Cell motility and chemotaxis of Dictyostelium cells is very similar to that of leukocytes and cancer cells, using the same underlying cellular processes as these higher eukaryotic cells. Dictyostelium is amenable to cell biological, biochemical, and genetic approaches that are unavailable in more complex systems. The discoveries we make using Dictyostelium are then confirmed in human cells and, in particular, in the context of directed cancer cell migration and metastasis. Our aim is to understand the molecular foundation of directed cell migration, which is expected to guide the design of efficient anti-metastatic treatments.

Our approach is interdisciplinary, in which we combine molecular genetics and proteomics to identify new signaling proteins and pathways involved in the control of chemotaxis, with live cell imaging using fluorescent reporters to understand the spatiotemporal dynamics of the signaling events, as well as biochemical analyses and proximity assays [including Bioluminescence Resonance Energy Transfer (BRET) and FRET] to understand how proteins interact and function within the signaling network. In addition, in collaboration with Dr. Wouter-Jan Rappel at UC San Diego, we generate quantitative models of the chemotactic signaling networks to help identify key regulatory mechanisms and link them to whole cell behavior.